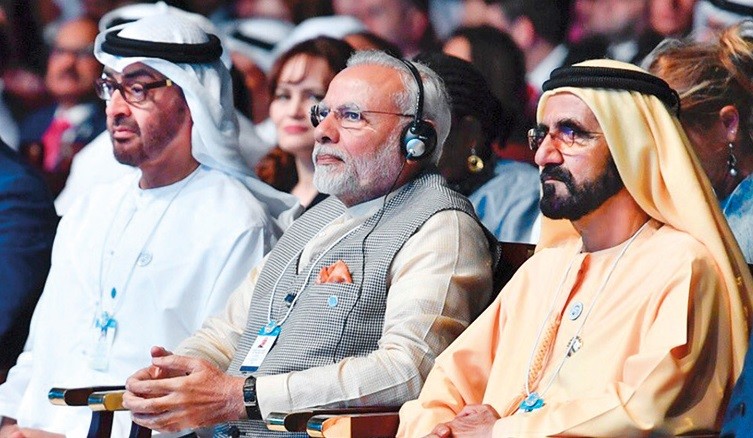 I had the opportunity to have met Prime Minister Modi during his first visit in 2015 and be part of his Dubai Opera address this time. As the Prime Minister opined it’s the first time after decades that we have a strong, comprehensive and vibrant partnership with the Gulf region and not just a relationship between a buyer and seller. Apart from the major agreements, a commitment of USD 75 billion investment in India in terms of trade was a prominent one during the first visit.

Later while we saw DP World opening up the Nhava Sheva Port in Mumbai and now an agreement for infrastructure development in the state of Jammu & Kashmir; Abu Dhabi National Oil Company (ADNOC) agreed to have a strategic oil reserve in Mangalore and now an investment of 10% stake in Abu Dhabi’s offshore Lower Zakum oil concession with the ADNOC. These are the developments that show how people to people trade relationship has grown into larger trade partnership between the two nations.

Earlier this week, we saw an agreement signed to remove the middle currency to make trade smooth and save the cost of conversation at every step of transactions between India and the UAE. It will immensely facilitate the goal of USD 100 billion trade by the year 2020 from the present USD 53 billion in the year 2016-17. Few major strides were taken ahead in-line with the UAE-India Strategic Dialogue during this visit namely MoU on manpower, combating cybercrime, space cooperation; MoU between Abu Dhabi Securities Exchange and Bombay Stock Exchange; India’s participation in Expo 2020. Prime Minister Modi welcomed ADIA’s participation in India’s National Infrastructure Investment Fund as an anchor investor and welcomed DP World's agreement with NIIF to create a joint investment platform for ports, terminals, transportation and logistics businesses in India.

Apart from the increasing and engaging trade relations, what makes us NRIs happy is the growing relations between our leaders. HH Shaikh Mohammed bin Zayed Al Nahyan being the Guest of Honour of the 2016 Republic Day parade in New Delhi; Hon Prime Minister Modi being invited as the keynote speaker on the inaugural day of World Government Summit and India being the guest country personifies the friendship. A Hindu temple complex being built in Abu Dhabi is a symbol of humanity and harmony and above all is the respect for India as a nation. We hope that the friendship and the bilateral relations between our nations grow even stronger and translate into the welfare of its people.

I believe it’s a golden period for all the businessmen and professionals with interest in India and the UAE to work harder and benefit from the growing engagements between our governments. The second visit of the Prime Minister was of ‘jet speed’ in his own words. He spent around 30 minutes with the diaspora and yet again, left them with a new zeal and vigour with his short but inclusive speech. We left the iconic Dubai Opera premises with the closing remark and reassurance by the Prime Minister that the dreams which we, the NRIs and our people back home have envisioned, together we will make sure that they come true before time.